Improving the timeliness and accuracy of AFP Surveillance

In response to the 2016 reported cases of wild poliovirus in Nigeria, eHealth Africa (eHA) partnered with the Bill and Melinda Gates Foundation, the World Health Organization, and Novel-T to pilot a mobile-based surveillance app for Acute Flaccid Paralysis (AFP) in children. eHA operationalized the use of the new Auto-Visual AFP Detection and Reporting (AVADAR) app to detect true cases of AFP, for the purpose of identifying and responding to potential cases of polio. The AVADAR app has a 30-second video of a child with AFP symptoms embedded in it which reminds Healthcare Workers and Community Informants to report suspected cases weekly. In addition to English, the video has been produced in three major Nigerian languages (Hausa, Igbo, and Yoruba), French, Krio, Themne, Mende, and Kono. eHA is deploying Android phones equipped with the AVADAR app to Community Informants in target regions of Nigeria, Liberia, and Sierra Leone. More recently, eHA has supported AVADAR’s expansion into Chad and Cameroon, and will soon be moving into Niger. Phone distribution occurs in tandem with instructing Community Informants in the app’s usage and supporting ongoing technical support. AFP surveillance, being one of the four cornerstone strategies of polio eradication, seeks to identify all cases of Polio through a system that targets any case of AFP as a potential case of polio. What makes the AVADAR program unique is that the electronic reports are submitted through the app by individuals within the community, which widens surveillance net beyond just healthcare workers. The app furthermore improve timeliness and accuracy of AFP reporting, thereby enabling more informed decision-making regarding polio prevention and response methods.

Lack of timely and accurate AFP reporting could mean some cases of AFP go un-detected.

What makes AVADAR unique is that the electronic reports are submitted through the app by individuals within the community, which widens the surveillance net beyond just healthcare workers. 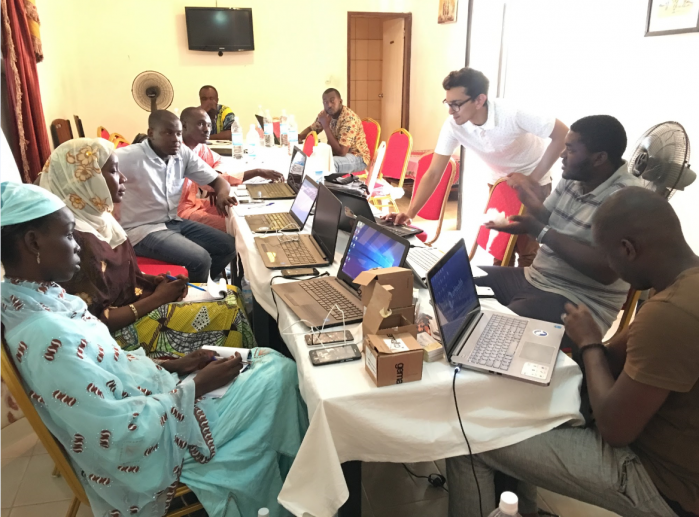 Founded in 2009, eHA’s mission is to build stronger health systems through the design and implementation of data-driven solutions that respond to local needs and provide underserved communities with tools to lead healthier lives. Based in Africa, eHA achieves its mission through establishing new standards in health delivery and emergency response through the integration of information, technology, and operations.
eHA has country offices in Nigeria, Sierra Leone, Liberia, and Germany and works across West Africa and are currently executing projects in many countries in the region, including Chad, Cameroon, DRC, Niger, and others. eHealth Africa has over 700 staff working across these offices and project offices. Leveraging an integrated approach as much as possible, eHA focuses on the following 5 areas: